One week from now, the British Parliament will vote on the withdrawal agreement between the UK and the EU. 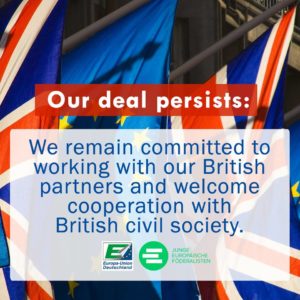 Whether the deal negotiated by Prime Minister Theresa May and Michel Barnier on behalf of the European Union will be accepted by a majority of MPs is still uncertain. Many MPs from different parties in the House of Commons oppose the deal, either because they think it is not comprehensive enough or they refuse that their country leaves the EU in the first place.

Regardless of the outcome of next week’s vote, we as JEF and Union of European Federalists in Germany remain committed and underline the importance of working with our partner organisations European Movement UK and Young Europeans towards a united Europe and European civil society without borders! We welcome and highlight cooperation and exchange with other civil society actors and political organisations from the UK. In particular, we want to strengthen the cooperation between JEF Frankfurt and YEM Sheffield.

The political relationship between the EU and the UK may change, but we take this as an opportunity and also a call for us to connect and build bridges even stronger!

As part of an open and participatory civil society, we will continue relationships with our British-European neighbours and always advocate for Brits being welcomed in Europe and having European rights!